Do unto others as you would have them do unto you, Matt. 7:12.  I disliked even typing that sentence. It just seems so trite. It feels like The Golden Rule was artificially manufactured for social engineering. As if it keeps society from consuming itself.  There is just something that feels completely false about it. “We’re highly complex humans. Surely engaging in social practices we learned in kindergarten doesn’t apply to the adult world.” WRONG. Despite its biblical declaration,  The Golden Rule is hard coded into our brains from thousands of years of evolutionary reciprocation.

One of the first studies of persuasion and reciprocation as we know if came from Professor Dennis Regan of Cornell University. On the surface, the study’s purpose was to evaluate art. The real goal was to see if people could be persuaded through reciprocation.

At the end of the experiment, the subjects receiving Cokes were secretly asked if they liked the lab assistant. Surprisingly, those that disliked the lab assistant bought just as many tickets as those who liked him. The obligation of returning a favor completely cut through feelings likability. Also interesting, all volunteer subjects that were offered a Coke accepted it, but not all drank it. So those feelings of obligation were felt by people who hadn’t even benefited from the lab assistant’s generosity.

Cialdini cites a similar example of the Hare Krishnas in the 1970s. A common scenario was for them to walk up to a business man in an airport and stealthy slip a dried up flower in his hand.  When he tries to give it back they decline saying “It’s our gift to you.” After a couple iterations back and forth, the business man shrugs his shoulders, flower in hand, and proceeds to exit. This is when the Krishnas askfor a donation. The business men often complied, gave a donation, and threw the flower away. 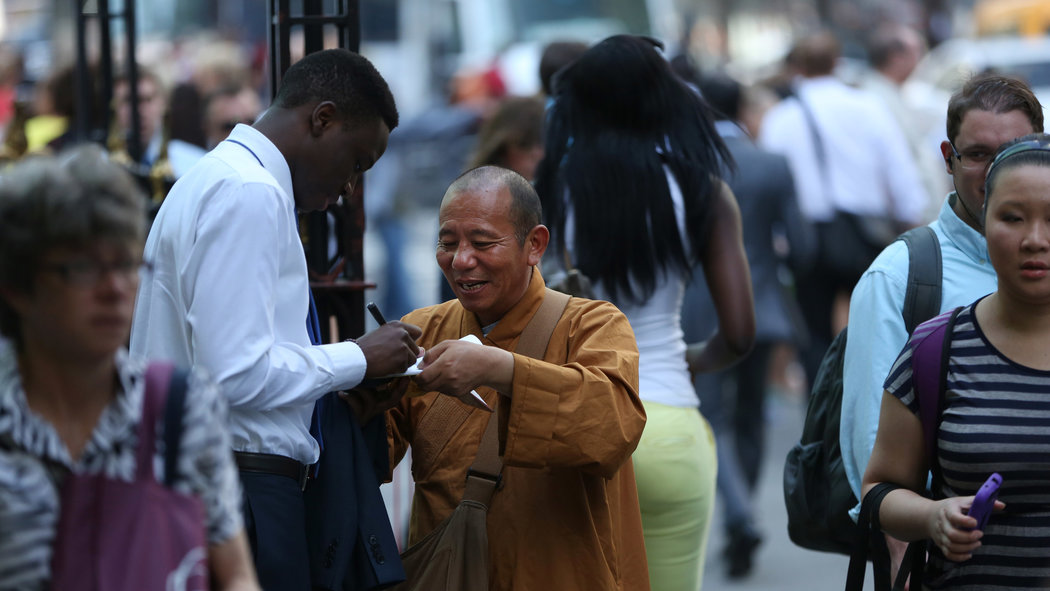 You see new versions of this today in cities like San Francisco or New York. I’ve been approached by fake buddhist monks beaming with large smiles. They walk up and try to slip a tin coin or medallion into your hand. When you ask them whats going on you don’t get much of a response. If you take it, they ask for a donation $20.

So whats behind all this? Why are people buying more raffle tickets when they don’t even drink the Coke. Why are business men giving the Hare Krishnas donations for flowers they don’t want and later throw in the trash.  The answer is obligation. The minute you agree to accept something, whether or not you actually want it, you are obligated. That is how they hook you.  You are in a sense your own worst enemy. Once you accept something, you can’t not want to repay it (unless you’re a sociopath).

Watch Gary Vaynerchuk reveal reciprocation as the basis of his whole promo strategy.

Cialdini cites an example from The Hidden Persuaders where a grocery store sold a thousand pounds of cheese in a day.  The store did this by inviting customers to cut as many samples off a block of cheese as they wanted.  What struck me was the participatory aspect of this promo. I think this was successful because shoppers weren’t just given a fixed amount but were allowed to take at their own discretion.

So if obligation is the goal, how do you how do you ensure all your gifts are accepted. You have to demonstrate that your gift took a certain amount of effort, time, or money.   It would be rude to deny a gift someone worked hard on. It does have a range though. If a coworker gifts you a new car,  kind of creepy. Someone buys you a coffee or lifesavers, within the realm of normal for that relationship.

Cialdini found concessions from negotiation actually produced stronger obligations than just an initial gift. Not only was the sense of obligation stronger, opponents were more likely to engage in successive deals.   In a typical negotiation one party starts off high while the other party attempts to negotiate the price down. When the first party agrees to a lower initial price he/she has conceded ground in the negotiation. Essentially they gave up personal value to come to a deal. Cialdini calls this the Reject & Retreat Method.

The R & R Method produces an obligation for the winning party because:

One thing to note is that this can backfire if the initial offer is seen as unreasonable.